On Jan. 22, 2016 QCCO announced plans to delist its stock from the NASDAQ and only provide financial information to stockholders upon request. The following trading day the stock fell off a cliff. QCCO closed at $0.6676 (down 44.38%) while reaching a low of $0.54. I believe the slump is due to indiscriminate selling. While one can make the argument that the stock should trade at a lower valuation because of less liquidity and increased risk. The company will also save money due to lower administrative and legal expenses. At least the drop seems too severe.

OVERLAND PARK, Kan., Jan. 22, 2016 (GLOBE NEWSWIRE) — QC Holdings, Inc. (NASDAQ:QCCO) announced today that it has notified the NASDAQ Stock Market (“NASDAQ”) of its intention to voluntarily delist its common stock from the NASDAQ Capital Market.  The Company intends to cease trading on NASDAQ at the close of business on February 11, 2016.  The Company’s obligation to file current and periodic reports with the Securities and Exchange Commission (“SEC”) will be terminated the same day upon the filing of the requisite notification with the SEC.  The Company is eligible to deregister its common stock because it has fewer than 300 stockholders of record.

Following delisting and deregistering, the Company presently intends to provide annual information regarding its performance upon stockholder request.  The Company’s shares may be quoted in the “Pink Sheets” (www.pinksheets.com), an electronic quotation service for over-the-counter securities. However, there can be no assurance that any market maker or broker will continue to make a market in the Company’s shares.

The Company’s board of directors determined, after careful consideration, that voluntarily delisting and deregistering is in the overall best interests of the Company and its stockholders. Factors that the board of directors considered include the cost savings that will occur as a result of the elimination of the Company’s obligation to file reports with the SEC, the avoidance of additional accounting, audit, legal and other costs and management’s attention devoted to compliance with the requirements of the Sarbanes-Oxley Act of 2002, the historically low daily trading volume in the Company’s shares, and the benefit of allowing management to focus on the long-term development of our core business.”[1]

QC Holdings provides financial services for underbanked customers in 22 States within the USA and in Canada. QCCO advances primarily single-pay loans (payday loans) (~2/3 of revenue) and installment loans through retail branches and their internet lending operations. Payday loans are small short-term loans. The average term of a payday loan is 18 days.[2] The average amount (principal +fee) is $383. Fees represent $59 of that amount so the average fee per $100 advanced is $18 for 18 days![3] This equates to an extremely high annualized interest rate. Many states effectively have banned or have tried to ban payday loans by imposing limits on the annual percentage rate (APR) that can be charged. There were, for example, efforts in Missouri, which accounts for 32% of the gross profit, to place a voter initiative on the statewide ballot for each of the November 2012 and 2014 elections. The voter initiative was intended to place a limit APR of 36% on any lending in the state. There weren’t enough valid signatures, however, to place the initiative on the ballot of either of the elections. Such a limit would render the provision of payday loans unprofitable.

The amount advanced under installment loans ranges from $400 to $3000.

During 2014, the average principal amount of a signature loan was $1,845 and the average term was 20 months. In 2014, signature loans accounted for 10.6% of revenue and were offered in over 200 locations in Arizona, California, Idaho, Missouri, New Mexico and Utah.

Auto equity loans are higher-dollar installment loans secured by the borrower’s auto title with a typical term of 12 to 48 months and a principal balance of up to $15,000. Fees and interest vary based on the size and term of the loan. During 2014, the average principal amount of an auto equity loan was $3,421 and the average term was 32 months. As of December 31, 2014, QCCO offered auto equity loans to customers at 134 branches in Arizona, California, Idaho, New Mexico and Utah.[4] In February 2015, the Company completed the sale of its auto facility for approximately $1.2 million, net of fees to an unrelated third party. The net book value of the property sold was approximately $1.2 million.[5] 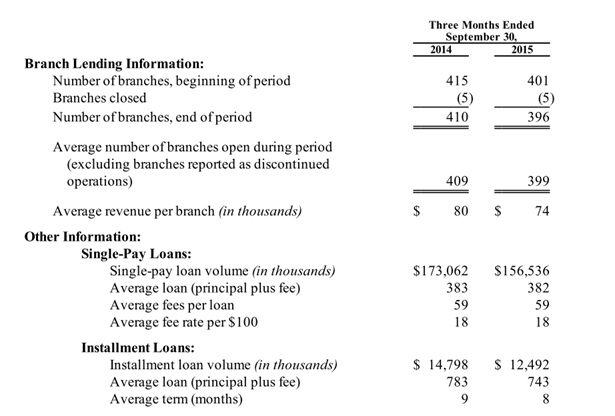 The balance sheet consists primarily of cash and short-term loans receivable. How much are the loans receivable worth? I think close to book value. To be conservative, however, I cut off 25% for my liquidating value. 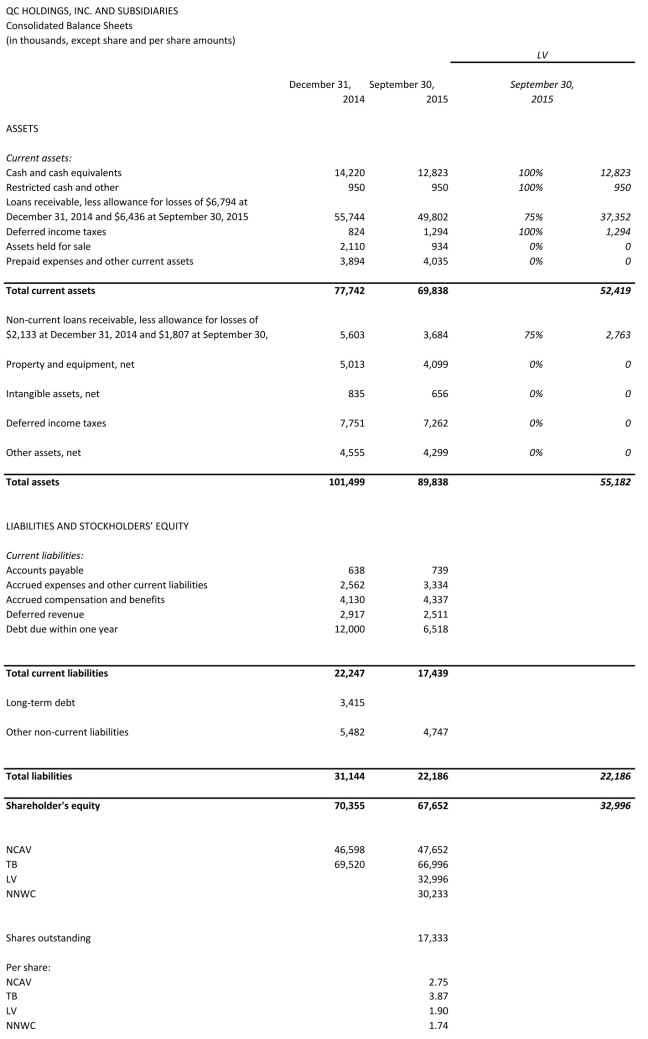 There are some things I really don’t like about this company. First, I am very skeptical about the viability of the business. Customers explore alternatives and many states want to effectively ban the services QCCO provides. Yet, management stated their intention to expand the business. Second, the compensation of management is high. There is also a loan from the chairman to the company at a 16% interest rate.

On the other hand, management owns the majority of the stock outstanding. Owning over 8 million shares the chairman should be incentivized to act in the shareholder’s best interest — even after considering the high compensation.

I have no opinion where the stock will trade in the short-term. It can certainly become much cheaper. Dark companies can trade at extreme discounts. I think, however, the stock is a good statistical bet at this price. I like the high liquidity of QCCO’s assets and the alignment of the shareholder’s and chairman’s interest due to his substantial stock holding.

Disclosure: I currently have no position in QCCO but intent to initiate a long position in the next days.