Katsuragawa Electric manufactures large format printers, copiers and micro motors. This obviously isn’t exactly a growth industry. I expect the printer business, in general, to slowly decline in the future. I think, however, at these prices, the stock is trading significantly below intrinsic value. At ¥179, the stock is trading at a 62% discount to NCAV (including net long-term investments). The company is currently marginally unprofitable. Management guides to a profitable FY 2016 (ending March 2016), however. They expect ¥110 million in ordinary income, from which ¥10 million is attributable to holders of the parent, ¥140 million in operating income and ¥10,500 million in sales for FY 2016. Management identifies the usual suspects to restore profitability: streamlining, reducing fixed costs, better inventory management, cutting executive compensation, firing people and developing new sources of revenue – nothing extraordinary that qualifies as a hard catalyst. On the other hand, I also couldn’t find (which doesn’t mean there aren’t) any signs of major adverse litigation, off-balance-sheet-liabilities etc. that might indicate severely negative surprises in the future. Below is the translated balance sheet, calculation of NCAV, NNWC and a conservative approximation of liquidation value: 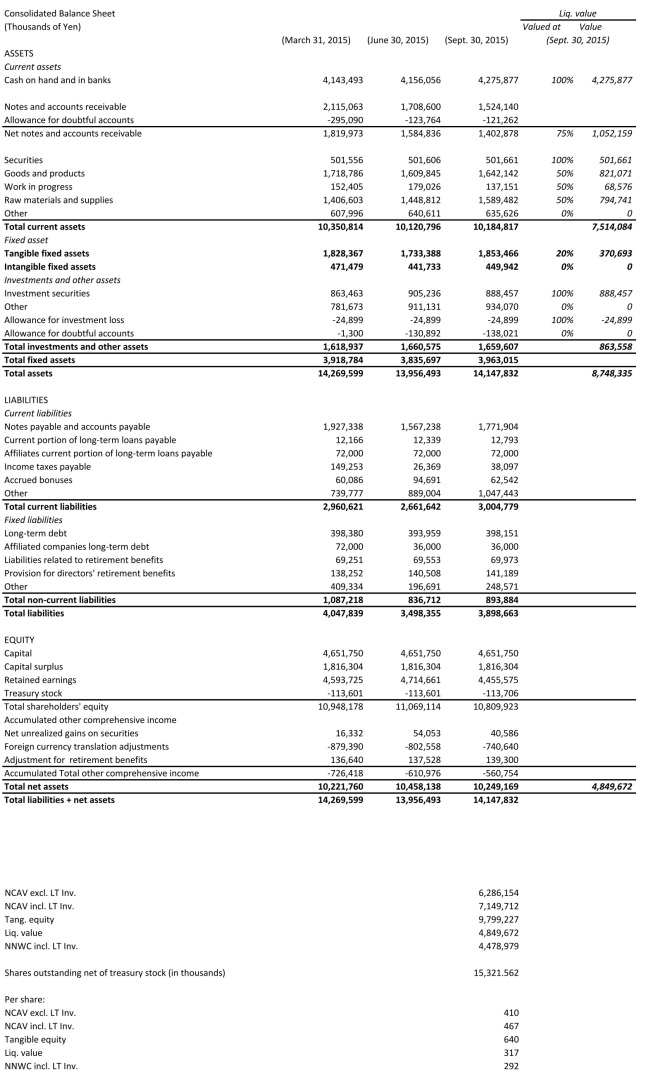 I want to reemphasize that I can’t read a word in Japanese and might miss something important. This stock represents only a small position in my diversified net-net basket. Decisions in this basket are based almost entirely on quantitative variables.

Disclosure: The author is long 6416:Tokyo.